I get up quite early in the morning, but not as early as I wanted to. The sun only rises at seven and that makes it quite difficult for my body to wake up earlier. However when I finally do succeed in dragging my body out of bed and opening the door of my very basic banda (small hut), I’m instantly rewarded with an amazing view on lake Kifuruka. Ok, admittedly, a bit of trimming the branches in front of the banda would make the view even more spectacular. But how lucky am I? I’m looking down on a lake that officially, according to the Royal Cyber Society (google maps) doesn’t exist! (So don’t think I’m making up names, google maps is not omniscient!)

Noah promised me a free tour on the motorbike around the crater lakes. When I make it to the concrete platform with a mesmerizing view on the Rwenzori mountains, that serves as breakfast area, he tells me I should wait a bit and enjoy my breakfast because he’s giving his apprentices a botanical tour. I don’t have any real rush, so I gladly wait for his reappearance.

After a small hour of enjoying breakfast and packing my bags, we set out together on our tour. The first stop is Lyantonde Community School, one of the schools that are founded with money from the eco lodge.

Usually it’s not my cup of tea to visit schools as a “white tourist” with adorable little children who start singing and dancing when you enter their classroom. But the lack of coffee and online, cynical news reports that morning make me very soft-hearted.

Even though I know that it’s not an all encompassing solution, I was moved by this grass root initiative and gave some money to repair the roof of the teachers’ room. 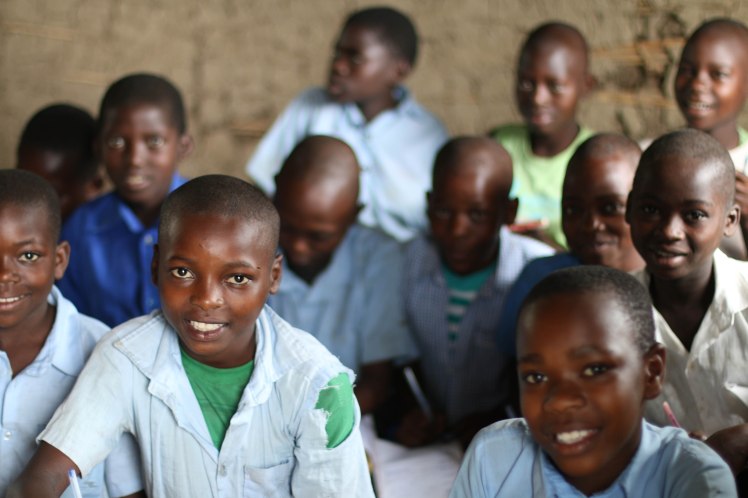 Afterwards we slalomed between different crater lakes, one even more beautiful and rustic than the other. We even pass the one that’s pictured on the 20.000-shilling note. When you see those peaceful little creeks and lakes you couldn’t imagine that most of these lakes were formed more than 10.000 years ago from violent volcanic eruptions and they can be up to 400 meters deep.

After bidding farewell to Noah and his staff, I jump on the motorbike and scramble on some muddy dirt roads towards Fort Portal. If the reports about the horrible dirt road between Fort Portal and Masindi are right, it’s going to be a very long day… and it is. I cover almost 300 km on dirt roads with a huge amount of potholes. After a while I’m not impressed anymore with the abundant green vegetation and the small villages. It all looks the same. I start to doze…

BAM!, another pothole, all of a sudden my speedometer starts to shake and finally drops to zero, while I’m still clearly driving. A small inconvenience that needs to be fixed, owing to the fact that without any indication of speed or distance, I’m a sitting duck for Ugandan traffic police. But this problem has to wait because I want to reach Masindi by nightfall.

It’s a long road and the only thing that really cheers me up is playing one of my favourite motorbike games in Africa: find the angry Chinese road works supervisor. At several places between Fort Portal they started road works to connect the two towns. Dozens of bulldozers and trucks spit black clouds of smoke and try to everything within in their means to push you off the road. All these machines are operated by local workers, as are the hundreds of simple shovels and wheelbarrows. But there is always a Chinese man stand or sits along the new upcoming road with a suspicious look on his face. Why do I think this image of this sad Chinese neo-colonialism is a bit funny? Watch the documentary “Empire of Dust” and you will understand

I arrive in Masindi as another man, a bit broken and longing for a cold beer after all those dusty roads. My pants, my jacket, my motorcycle cases, … everything is covered in a thick layer of the red dust.

As I wake up I think I’m still in the middle of a nightmare when I see at the breakfast table that we soon will have to deal with “president” Trump. As an addition to my miserable feeling I completely get lost and end up in Kagumba .

I want to enter Murchison falls national park from the south, so I take a U-turn and drive back. But before that, I give a ride to a maize trader, Tony (19 years). He has to get to town in search for his bike. His bike, he tells me, is his livelihood. It’s a sturdy black bike, two metal breaks and no gears. It’s designed to carry several times the weight of the driver. Most of the times you see them being pushed from one town to another along the road, loaded with big bags of maize, coals, … . This is what Tony does.

Calling himself a maize trader is maybe a bit of a euphemism, but he dreams big: being a businessman in Dubai is his end goal. I ask him about soon-to-be president Trump. He thinks it’s an excellent thing:

“Trump is a businessman, just like me! He understands what the people really want! He’s very successful in business so he will make a fine president”.

I must say I hadn’t looked at it that way. Being a successful businessman is definitely in the mind of a lot of Africans the ultimate achievement, so Trumps earns quite a lot of respect from traders like Tony. 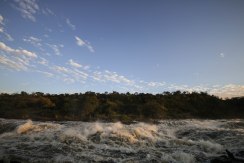 When I finally reach Murchison falls, I can sit down and think a bit about the possible consequences of the latest international political events, but that’s difficult when you get eaten alive by hordes of Tsetse flies. They share a first place together with mosquitos on my most-annoying-creatures-in-the-world-list. At sundown the flies go to bed and I can enjoy a few minutes of orange light on the furiously wild, white Nile River, pushing 300 cubic metres of water through a 7 meter wide canyon every second.

I sleep ten meters away from the River, just on top of the falls, where you can hear the constant drumming of the water. Which becomes a bit of a torture because I haven’t packed enough drinking water. I decide to take some Nile river water and to cook it, water with literally the taste of real adventure!