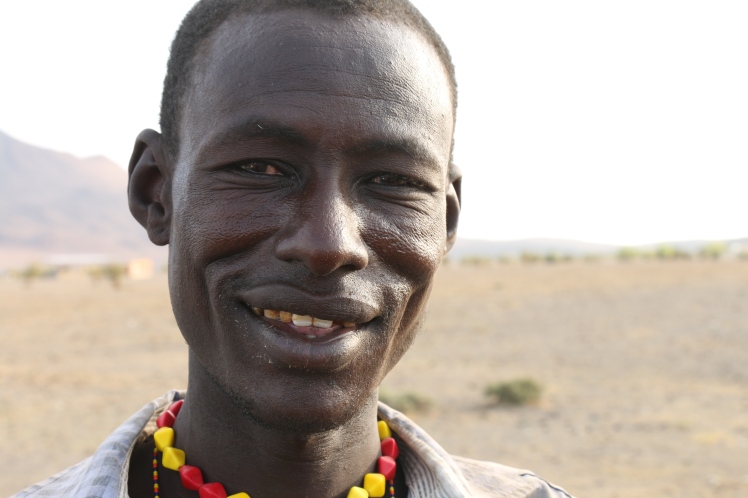 We get up the next morning at first light. We head up north because we heard of a small village called Moité, that’s not indicated on the map, were we could buy some drinking water. The road is smooth, which actually just means it’s not too sandy. There’s no petrol in Moité but there is water and soda. Just before the town I give a ride to a shepherd who’s walking along the road. Apart from a few laughs and a giggles our communication is zero.

In Moité one guy speaks a bit of English and I find out his name and age. While we’re driving towards the village in the sand we almost fall a dozen times. I decide to not take any passengers on my bike for the rest of the trajectory. It’s too risky. I don’t want anybody to get hurt if I fall and that is a very plausible thing to happen.

Just before the “town”, which is actually just a few shags and a police station, we have to take a right to circumnavigate the Sibiloi national park. We continue on a broad, sandy road eastward. We finally are starting to enjoy riding in the sand. If there is enough space you can let you bike follow it’s path without interfering too much by tossing and turning the front wheel. It feels a bit like skiing in deep snow. After 25 km the joy and euphoria comes to an abrupt end when we realise we’re not on the right track. Including our road back to Moité we made a 50 km detour. This doesn’t sound as a big distance with a motorbike but in these conditions it’s half a day of driving.

We find the right road and it turns into a rocky road covered with treacherous volcanic boulders. They’re round and even without any rain very slippery. I fall over a couple of times and my side cases get a serious battering. We stop at an Oasis when it becomes too hot at noon. To make sure we have enough water we fill up our empty water bottles in a local water pit. It’s actually more a mud pit. We add some Chlorine tablets and hope it will be enough to clean up the water because in these conditions the last thing you want to have is aggressive diarrhea. The water tastes a bit funky, but at least it will keep us hydrated. We each need at least six litres a day in this blistering heat.

We ride on with a potential petrol shortage on our mind. We could ride 30 km to the entrance of the Sibiloi national park, hoping they have vehicles that ride on petrol. We have no idea how much fuel our motorbikes are consuming in these conditions (we don’t have a petrol gauge on our bikes), but we decide to take the risk and to push on to Illiret. The omniscient oracle, called google, told us of petrol in this village, close to the Ethiopian border.

We still have to cover 120 km to reach Illiret when we stop for the night in the middle of dry riverbed, not a single living soul in sight. We cook in the middle of the road, no traffic passing anyway!

It’s difficult to have some sleep with the blasting wind tearing down our tent. During the night I go out to let some water flow once again in the dry riverbed. Suddenly something snatches at my shoulder. I’m petrified. Slowly I turn around to meet my possible aggressor! Who could attack me in this god-forsaken land, where human nor animal can survive? It’s a four-meter tall acacia that’s widely swinging its thorny branches around. I’m shocked by so much aggression from a plant which I always considered the most unharmful beings on this planet. Even the plants in these lands are hostile.

We head out again early in the morning, before the heat paralyses the whole world, including ourselves. After a small hour of riding on again some slippery volcanic rock paths we see an old, rusty blue land rover in the middle of the road. As we stop four men who desperately try to changes two punctured tires greet us. The whole process isn’t quite easy if you don’t have any material to glue the inner tubes of the tyres, if your jack isn’t working and if you haven’t eaten in three days. Yes, they tell us it’s been three days since their tyres pushed out their last breath of air. We give them our breakfast, a package of biscuits, and we share two oranges and a mango. They use some of our spare motor oil to repair their jack and we give them a tube of glue and some spare rubber to repair their tyres. They assure us they will be fine and tells us we can continue. While we drive off I think what would happen if we would get stuck. We don’t know these lands and we are not as adapted to it as they are. It was clear that even they were struggling.

We push forward, which can be taken literally because the roads are still rocky and our average speed doesn’t exceed 30 km/h. Today it’s Willems’ turn to have some close encounters with the rocky desert floor. I makes me feel a bit better that I’m not the only one who involuntary throws his bike on the ground. When the sun is at its highest point we stop again to hide from the sun. A little classroom next to a small settlement gives just enough shade for us and our bikes. Right away the whole village surrounds us. Willem sees some severe cases of malnutrition and attempts to explain that the kids need more protein. It is true that the whole village could be the perfect spot to film a new live aid video clip. Willem gives some antibiotics to a little girl with an infected knee. I admire the way he preforms his job and it makes me wonder what I personally contribute to this world.

The sun is burning and we gave our last water to some shepherds. It’s crazy how these people can live in these circumstances. You can drive for miles on these roads without seeing a living soul. Then, out of nowhere you can see a dark blurry shape along the road. As you approach this shape turns into a human being. It’s a pitch-black shepherd that’s walking on what could also be planet Mars. They never walk with any sort of water/liquid container, probably because there’s just no liquid to transport. Some of them can walk 100 km for several days without water. Their bodies are biologically adapted to this extreme climate.

In the shadow of the small school building I see one of the naked, malnourished children of the village wandering around in the scorching sun. He must be a year or six; his legs look like two twigs that are attached to a swollen belly. he’s carrying a small goat that is fighting for it’s last breath. he’s carrying it to god knows where. Two bags of bones one carrying the other. Every five meter the kid drops the goat, kicks it, the animal mutters a last moan. It’s over… it symbolizes how hard this country and its inhabitants are for eachother. No country for northern European men.

We drive into Illeret and struggle to keep or bike straight in the deep sand of the main boulevard. In a small excellent bar/shitty hotel/even shittier butchery we drink the last two (cold) Stoneys in the whole village. We don’t feel sorry for that because we really needed our Stoney fix. A honking blue Land Rover drives by. Its passengers are smiling and waving at us. Seems like our glue and rubber did the trick for the stranded guys this morning. They are happy, we are happy. We finally reached the Promised Land, Illeret.