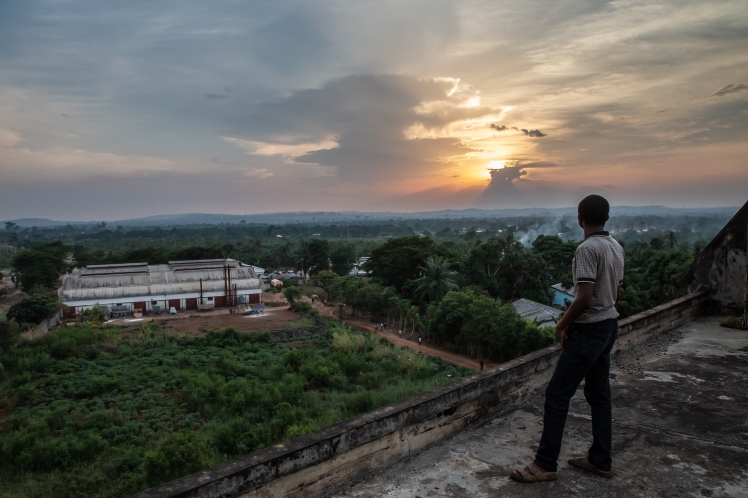 A few months after my first visit I was fortunate enough to visit Gbadolite for a second time. This time I wasn’t so surprised as the first time to see the enormous airport in the middle of the equatorial jungle. This time I had the time to discover the city centre of Gbadolite a bit more. The perfectly asphalted roads and the road signs in French highway style are already a quite unique for a Central-African town of this size. But on top of that, the town is littered with architecturally remarkable buildings in a tropical modernist style.

The most visible and impressive construction is the old regional building of the REGIDESO (Régie de distribution d’eau), the national water distribution company. It looks like a spaceship out of concrete in the middle of the jungle. My colleague, Franck and I were lucky enough to be able to enter. (it’s actually not that difficult, the building never had any doors). We even got a private tour from Godefroid and Jean-Bosco, two teachers, each in a different school in the same building. Godefroid teaches electricity, ironically enough in a building that never had any electrical wiring. Jean-Bosco lecturers accountability on the second floor.

“The water distribution company gave us the permission to use the building as a school to protect it from looters” says Godefroid.

My compliments to the people that can still loot something, there is nothing left. But then again, in Mobutu’s palace a few miles outside of town there are only a few walls left, every building here can still be the victim of looting.

Apart from some wooden school benches there is nothing left in the building, everything is just stripped down to the bare concrete. As we make our way up the stairway to the top of the building our new friends get involved in a discussion:

“I’m sure that this building is unique in Africa” declares Godefroid.

– “I’m not convinced about that, I’m pretty sure they have the same sort of building      in Ivory Coast!” replies Jean-Bosco.

By the time they come to the agreement that there might be a building similar to this one in Ivory Coast but not exactly the same, we are on top of the roof. While the equatorial sun makes her descent at a dazzling speed, we still try to enjoy a few moments of the very short golden 20 minutes before the tropical dark takes over. From all sides you can see for miles and miles the equatorial forest. The whole scenery gives me a sort of post-apocalyptic-meets-Jurrasic-Park kind of feeling.

Just next to the REGIDESO building there is a Coca-Cola factory that once provided jobs to 7000 people. Surprisingly enough this factory wasn’t looted, maybe because many of the inhabitants still believe to recover their old job one day. The factory closed after Mobutu’s downfall, but his family still owns the factory. Since its closure there were several proposals to reopen the factory. The Mobutu family never came to an agreement with potential investors and the factory remains closed to this date to the great despair of the population of Gbadolite.

The reopening of the factory could mean a new economic incentive for this forgotten city. With its easy access to the Ubangi river (12km north of the city), which is the biggest tributary stream to the Congo river, and the Central-African Republic on the other side of this river, it could provide a large part of Central-Africa with this sugary caffeine drink. For now, the Coca Cola cans you can buy come from Angola, 1300 km south as the crow flies. It must take weeks to transport these cans first from the Angolan border over land to Kinshasa where they are shipped on big river rafts, upstream, for several hundred miles to Gbadolite.

The final part of my visit is the old Five-star hotel Nzekele. In this bungalow hotel complex all of Mobutu’s famous visitors stayed, among them, the Pope, Belgian King Baudouin and French President Mitterand. There is not seat left in the old hotel cinema. The swimming pool hasn’t seen a drop of chlorinated water in more than twenty years. But the red and blue hotel bar still serves (warm) beer.

Together with my colleague Franck we pay a visit to Francks brother, Gilbert, who’s a medical doctor for an international NGO in Gbadolite. He rents one of the bungalows as a temporary apartment, while his family resides in Kinshasa. We are invited for dinner, but we have to eat in pitch black darkness, because of a power cut while a torrential thunderstorm breaks loose. These power cuts happen very rarely because the city is provided with electricity by its very own hydroelectrically power plant a few miles to the north east of the city. Maybe the only real, sustainable gift from the great Maréchal to the people of Gbadolite.

As I step for the second time on the airplane to Kinshasa I wonder if this will be the last time that I will ever set eyes on this place. Will this city succumbed further to ruins and decay? will the Coca Cola factory reopen one day? or will it become a tourist hotspot (taking into account some practical obstacles, this seems quite implausible)? What will still be left if I ever come back? Will the jungle, after all the human looting, reclaim its place?