We arrive in a little town, Kemer Dengaye (don’t bother it’s not even indicated on google maps). Home to the delicious Guna spring water. I’m making some explicit publicity here. It will become clear why exactly as you continue reading. We arrive in the city around sunset. We decide to eat and than to look for a place to sleep. We drink a beer in a small bar and have some spaghetti with injera (It’s allowed for Italians and pseudo-romans to start shouting at this point)

We start to talk with a guy. His name is Fentch, He’s an electrical engineer in the water bottle factory near to this town. In return for a ride to the factory, he invites us to camp at the factory. We pitch our tent and join him for yet another dinner we’re invited to. Three guys and one girl live on the grounds of the factory. The girl is the accountant. The three guys are all engineers and all friends since high school. Studying in the same university, working at the same place now. They’re 27 and all getting married next year. We get some local ouzo drink to taste and we laugh a lot.

Fentch speaks very well English. He comes from a well educated family and he’s proud of his Amharec origin. In their dining room hangs a portret of Tewodros II, the first new king of kings, emperor of Ethiopia. He committed suicide after the Brits stormed his fort of Maqdella. His mother was a simple merchant on the market of Gonder but he made it to emperor and preferred to commit suicide than to surrender to the Brits in 1868. (the whole quarrel started about an unresponded letter to queen Victoria, Ethiopian are very proud!) His end is still very romanticised by a lot of Amharec Ethiopians. The picture of the crying toddler with a dirty face next to it seems to be popular all over the world.

We wake up quite early. I get up out of the tent half naked and an old grumpy looking man stares straight into my eyes. I’m looking right into the office of the plant manager. Luckily his face turns into a gentle smile as he greets me. 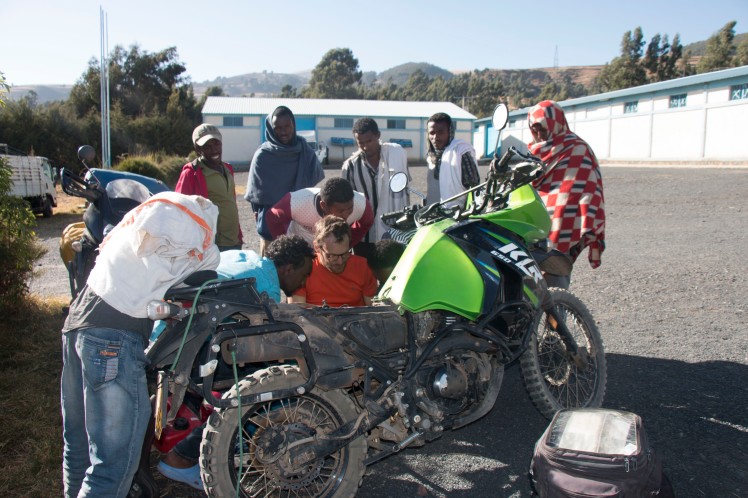 I remember I have to repair my front light, just before arriving the day before it broke. Good that I’m in the company of an electrical engineer and two mechanical engineers. I try to change the fuse but it doesn’t work, all of a sudden even my engine won’t start. The main starter fuse has also broken. As time proceeds I’m getting more desperate and doom scenarios start to pop into my head. My engineering team on the other hand gets all excited! They have a engineering quest to fulfil. 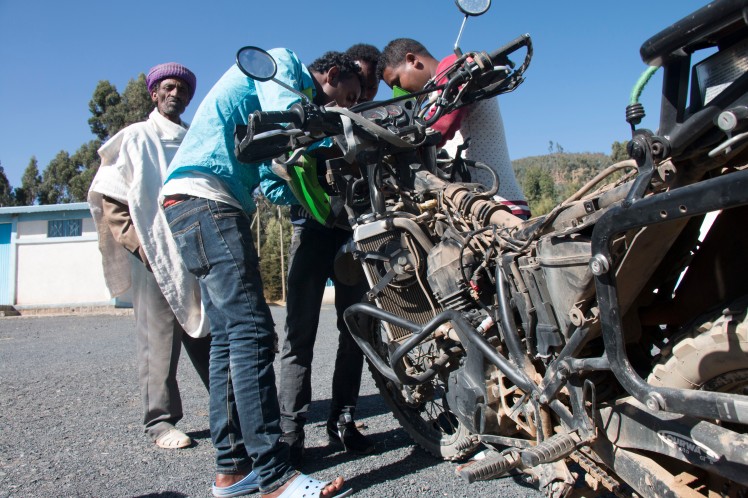 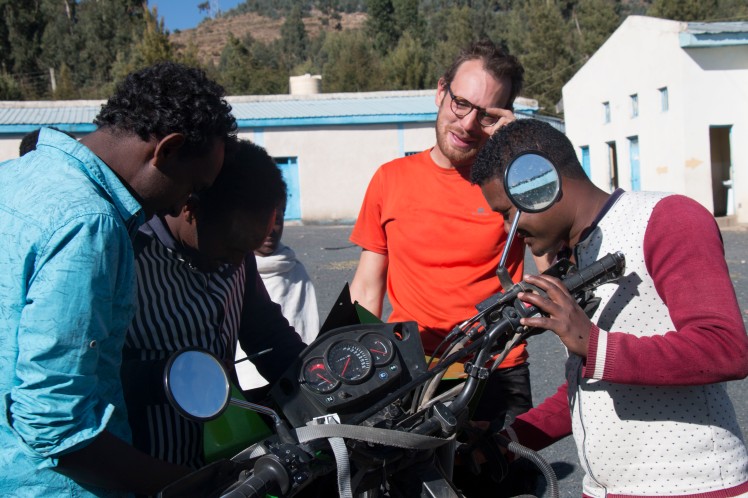 The plant has been out of production for a few days because the Chinese plastic pellets to make the water bottles haven’t been delivered yet. All personnel is just hanging around the plant, waiting for the delivery. The factory produces 30.000 litres every day. Seems a lot to me but I have actually no idea. (we were even drinking Guna water the day before when we where visiting Lalibella and we turned one of their bottles into an cypher to poor our petrol)

The water comes from a well a few kilometres up the mountain (330 meters higher). The water is treated, tested and than pump it into bottles.

All excited, the guys take their electrical circuit tester and we set of on a journey into to deeper electrical circuits of my motorbike. We strip Kermit (the bike) almost completely. In the end it seems to be the headlight that’s forming a short circuit, there must have been even a small fire. We change the lamp and the fuses. After a 3 hour search the bike is working again! I’m more than grateful to these geniuses.

Before we want to leave our camping ground/water factory the guards block our way. Last night we promised to give them 100 birr tip for the night. They agreed. But now they smelled an opportunity to cash in and think that’s not enough. They won’t open the gate. We’re in a padlock; they are demanding 400 birr, which is the equivalent of 20 euro’s. That’s the price of a midrange hotel and a average week salary for an Ethiopian! We offer them the 100, which should be enough. They were doing their job anyway and it’s a nice extra wage for these four stooges. They don’t want to accept it. In the end they do and they let us through.

Encounters like these give this country a bit of a sour taste. Ethiopia is a beautiful country but full of contrasts. On the one hand these amazing guys helped us out and on the other hand their greedy colleagues see us as a lime that should be squeezed. I’m confused.

We arrive in the old city of Gondar just in time to prepare the celebration of the New Year. At midnight we end up in a very dodgy bar surrounded by presumably all prostitutes. Ethiopian New Year is in September, so nobody is celebrating. After having had the best Christmas on top of a volcano a week before this must have been one of the saddest New Years I ever had in my life. We go to bed but get awoken by the sound of Orthodox church prayers. From 1 AM to 9 AM in the morning. The priest starts to mumble and moan in a microphone. I heart my fair share of imams, but these orthodox priests are unbelievable. Ethiopian Christmas is approaching and as it seems the whole country gets more and more crazy.

Another thing that darkens the mood are our monetary questions. We have a serious trade imbalance on our budget. We desperately need dollars but there are just no dollars to be found in Ethiopia. Just like petrol only the black market can supply us. We need them to continue our trip to Sudan. There are no ATM’s in Sudan and we need a lot of dollars to cross the border with Egypt. Our search for dollars becomes a bit desperate. But everything has an upside. We meet also some nice people whilst hustling to get our greenbacks. The rate on the black market is a whooping 27,5 birr for one dollar (the official rate is 22,5) this means that we could loose 200 dollars just by changing our money.

We can exchange some birr to euros with a Dutch couple in one of the many hotels we visit. She’s Ethiopian (Oromo) but has lived ever since she was 14 in Holland. They have two funny kids and they’re travelling around Ethiopia. We end up drinking some beers and having dinner together.

The next morning we catch our biggest fish. We go to a local tourist restaurant “four sisters”. One of the sister is married to a British guy, Tony. He has done some motorcycle travelling and he wants to exchange the dollars for the drivers for his upcoming tourist tour in birr for a reasonable 24 birr / 1 dollar rate. We don’t hesitate and exchange all our money that’s left.

We leave for the border with Sudan with a big smile. It lessens a bit when I almost hit cow (never had such a close encounter, just in front of some saint paintings…?) and also when we find out we took a wrong turn and have to add 100 km to our itinerary. As we move closer to the Sudanese border, we’re leaving the highlands behind, making our descent towards hotter and dryer lands.

We arrive at the border well before border closing time.