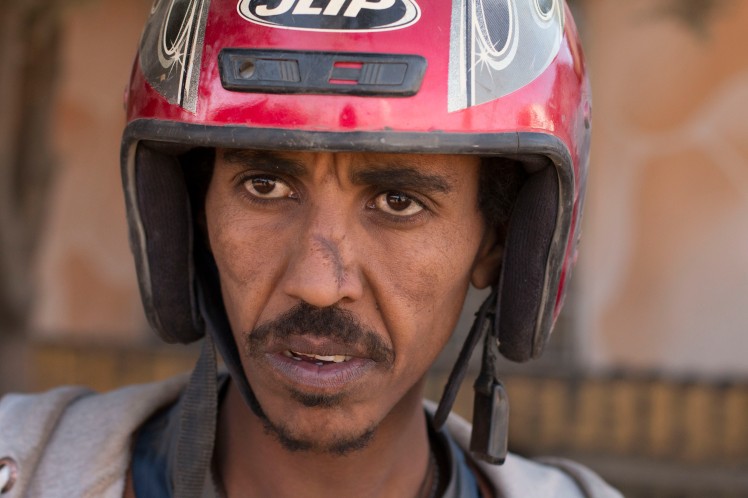 We ride from Mekelle to Lalibella on a beautiful road. We don’t make it to Lalibella in one day and we sleep on a mountain pass. There are not many flat places to be found in this area so we’re happy when we finally find a place to pitch our tent next to a little farm. In the morning I’m awoken by children’s voices. I open my side of the tent. The kids of the farm have come to say good-bye before they leave for school. 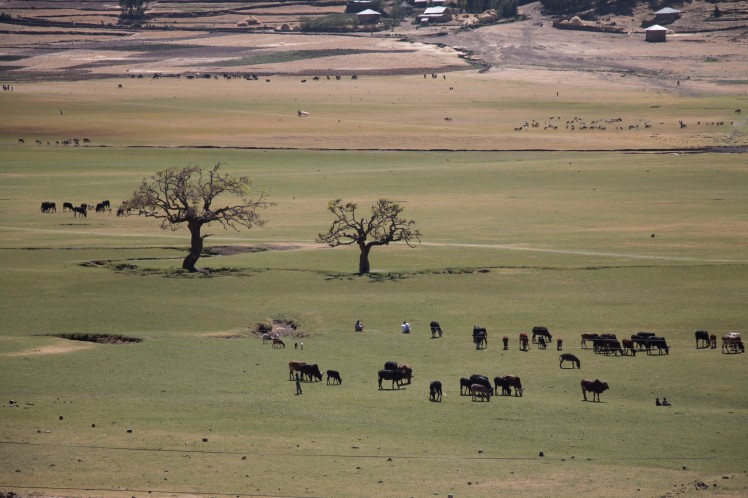 It’s still very cold but it doesn’t seem to bother them. Because they don’t ask for it like the other kids we meet on the road I give them a pen. They laugh and set off to school. I turn around and try to warm myself up before getting out of my sleeping bag. We pay a little tribute to the blind grandmother of the house. The rest of the family left already when we are ready to go. Like the other members of the family she doesn’t speak a word of English, neither do we know any Amharic. When she feels the banknote she smiles and gives us something I interpret as a blessing.

Before we turn left on a dirt road towards Lalibella, we stop on top of the mountain pass. The view is astonishing. There’s fog in the valley below us and only the mountain tops on the horizon are still visible. The last 50 km are not paved. We stop in a little village to have breakfast. A bus stops and all of a sudden the market square turns into a chaotic pool for ten minutes. Everybody wants his coffee and his injera at the same time. They’re all pilgrims on the road to the sacred site of Lalibella. After the last sip of coffee has been taken, the bus speeds off, leaving our breakfast and us in clouds of dust. Two older monks decide to walk the last kilometres to Lalibella. The way they walk I seriously doubt if they will ever make it. But if you travel to a holy place you must also believe in miracles, I guess.

The atmosphere in Lalibella and its rock-hewn churches has something sacred. It is the period leading up to Ethiopian Christmas. More and more pilgrims are flooding into the holy city. They are all draped in white cloaks and scarfs. They all camp around the churches. It’s amazing how these churches are today still used as a pilgrimage. Because of the state of emergency in Ethiopia, the number of tourists is rather low. It seems that the pilgrims have taken over once again these churches, for the better I would say. Our high entrance fee sponsors apparently their yearly pilgrimage. A few impressions of Lalibella: 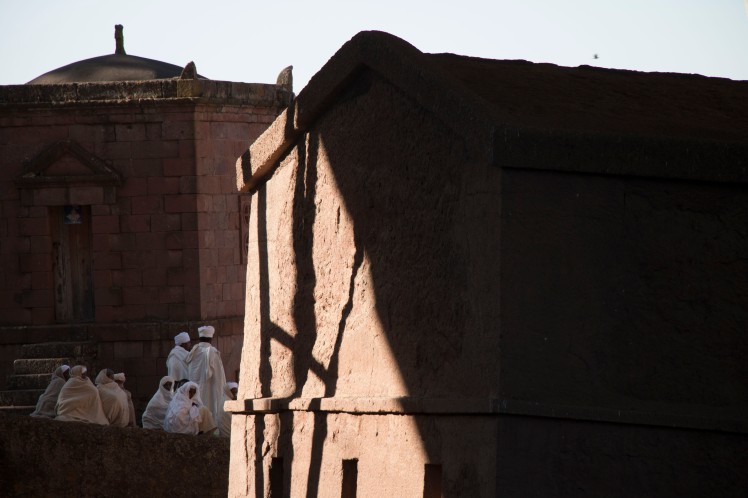 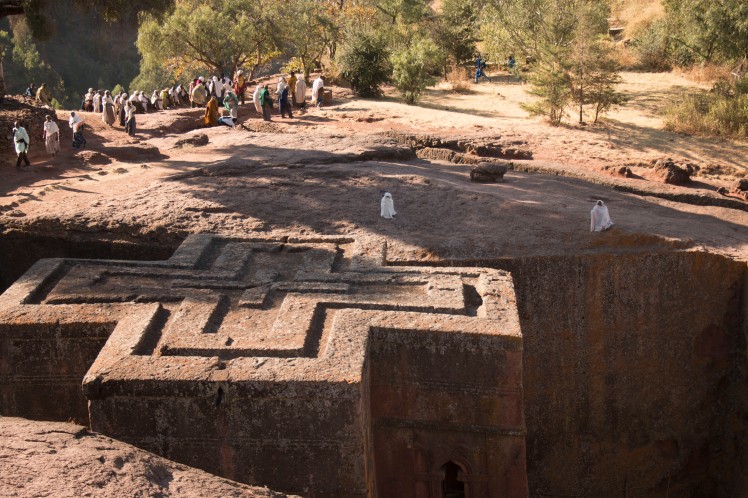 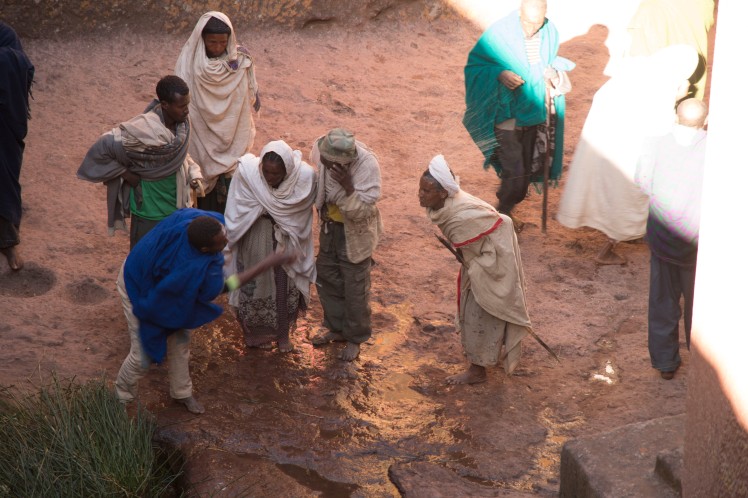 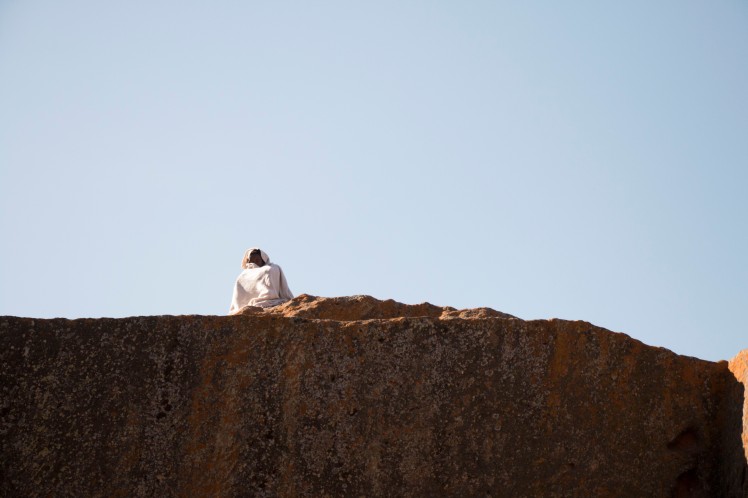 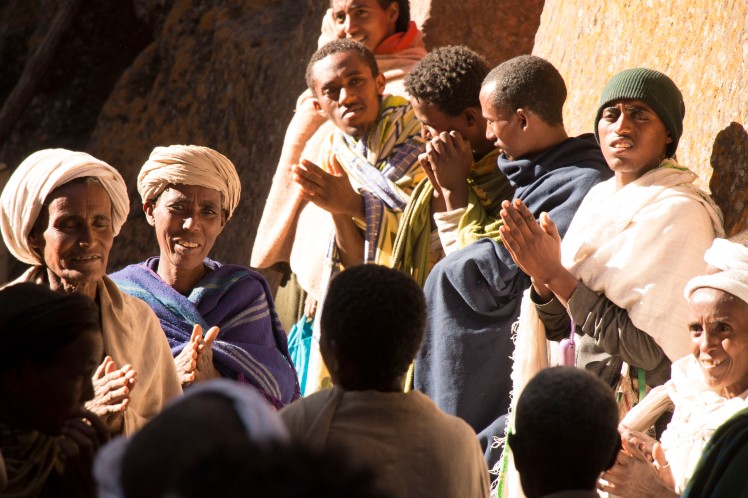 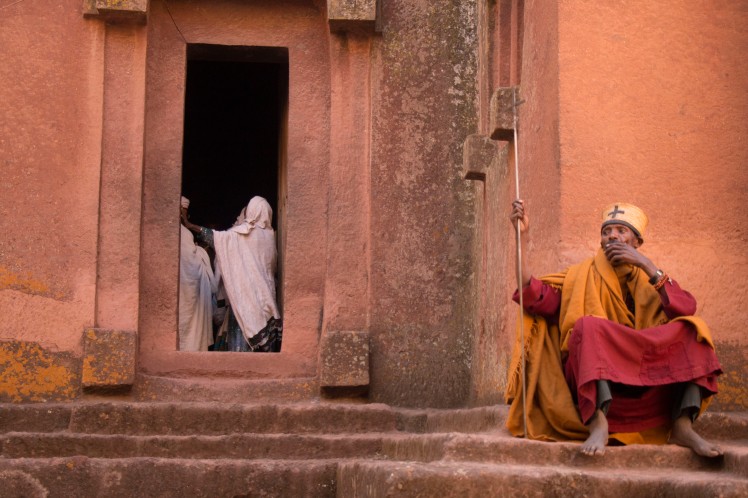 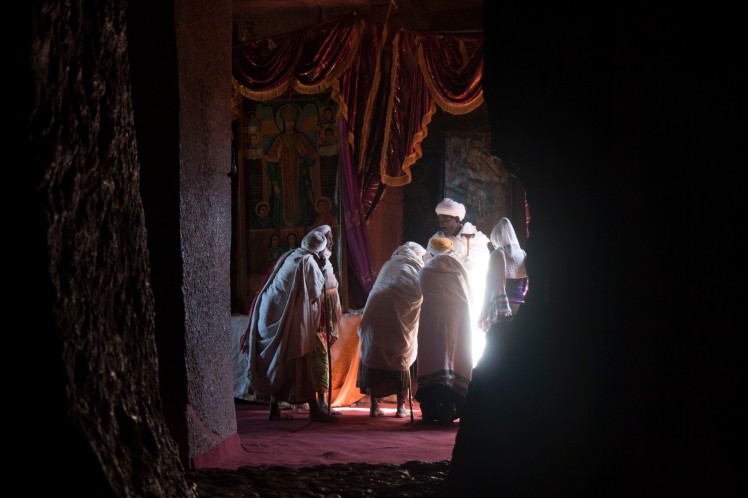 After our two day pilgrimage it’s time for us to leave. I decide to take a hitchhiker, Jozef the hustler. He is your typical hustler. Scamming tourists seems to be his main activity in life.I personally don’t like those types and like to avoid them. But I think it’s important to also take those types of people on my motorcycle. Everybody deserves a chance and a ride in life. The road is dusty and rough. I almost instantly regret taking him as a passenger. It’s exhausting and hot even without a passenger this road is a challenge. Apart from the fact that he twists and twirls on the back of the motorcycle, which is rather annoying, he’s doing a fairly good job in warning me for the kids that want to throw rocks at us.

He tells me he earns 200 dollars with each group he travels with. He just delivered a group of Germans and French to Lalibella. Next week he has to be in Gonder to guide a group from National Geographic who want to film some sort of snake.

I nod but somethings don’t add up …If he makes 200 dollar per group, he could make a serious living. Why is he then travelling with only a plastic shopping bag? He will help the team of National Geographic to find a very unique snake, but he doesn’t even now the name of the snake? He has an official guiding company but he doesn’t pay taxes? And last but not least, I never encountered a tourist group of French ànd German tourists? That’s just absurd!

We eat kilos of dust before we arrive in Ganesha, where we continue on the main tarmac road to the West. We want to buy petrol but there is off course no official petrol for sale. So we buy it on the black market, again… it’s rather polite to state that Ethiopia has a serious petrol shortage. Again there’s the same story, haggling about the price and in the end still paying way too much. Admittedly as an extra service our petrol guy even buys a tea sift to guarantee us clean petrol. It’s not a luxury cause the bottom of his jerry can is full of dirt.

We leave our two cheaters and head towards the old city of Gondar, ancient place where the Solomonic kings ruled Ethiopia for hundreds of years.

Jozef is a bit disappointed when I tell him I can’t take him all the way to Gondar. I pity him a bit. I know he’s making up the stories to give himself credibility as a guide. He definitely wants to guide us and get some money from us in Gondar. But I can see that he knows that I don’t believe him. It’s a bit sad, cause I never got his real story. The façade remains…

We ride again into the Ethiopian highlands. The new Chinese road is just a few years old but it’s already showing some serious signs of decay… cracks, deep tracks and enormous potholes, all in combination with the cattle that likes to straddle on the road.